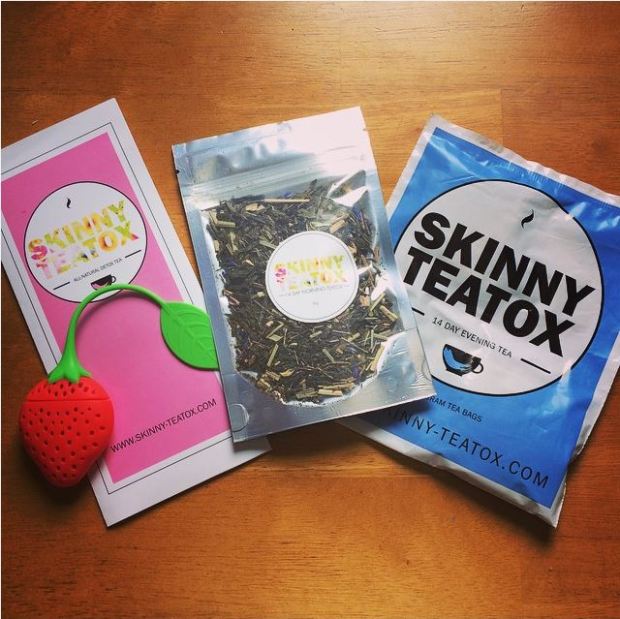 After hearing about the rising tea-detox trend, I was curious to try it out for myself.  And, while one of the main benefits of a tea detox is weight loss, personally, I was more interested in one of the other benefits: increased energy levels.  I was excited when given the opportunity to try the 14 Day Skinny Teatox (which just happens to be the #1 Teatox in North America!).  This is an all natural Teatox (no chemicals or preservatives, is gluten free, GMO free,  nut free, and vegan), that helps with:

So how does it work, you ask?  The 14 Day Skinny Teatox comes with 2 teas: a loose-leaf tea to drink in the morning or during the day (which helps boost metabolism/burn fat), and nighttime tea bags (to drink every other night during the Teatox), which detoxify and cleanse.

My Experience and results.  For me, drinking tea each morning is already part of my daily routine, so it was easy to substitute my normal “2 milk, 1 sugar” for the Teatox.  It was the nighttime tea that took some getting used to, but it proved to be quite relaxing and pleasant tasting (I added a little honey to mine).  I will say that it took a few nighttime teas before my stomach was used to the cleansing effect.  I’d recommend starting this Teatox on a Friday or a weekend (like I did) to gauge how your body reacts, and then adjust accordingly.

It’s also important to note that this tea can’t work magic alone: it requires you to have a healthy diet and be active.  I admit that I didn’t drastically increase my activity during the Teatox, but I did try to walk more. As someone who doesn’t own a scale (I’m a believer in feeling good, and not becoming a slave to the numbers), I can’t speak to the exact amount of weight I lost during the cleanse, but I can say that my clothes seem to be fitting significantly better, and I don’t get that “full” feeling I used to get nearly every day.  I was surprised to find that the morning tea did in fact suppress my appetite, and I didn’t feel the need to have nearly as many “snack attacks” as I normally do.  I noticed that my energy levels did in fact increase, and that I also stayed focused and feeling awake throughout the entire day (whereas with other teas, I tend to need an afternoon refresher).

Interested?  You can purchase the 14 Day Skinny Teatox (or any of their other programs/products) online at: http://skinny-teatox.com (they ship to most places around the world!).  And, if you’re curious to know more, be sure to follow their social media accounts (hint: there’s a promo code on their Instagram account right now!).

Have you tried a Teatox?  Let me know in the comments below!

*Note: Product provided for consideration via Brandbacker; all thoughts and opinions are honest and are my own.